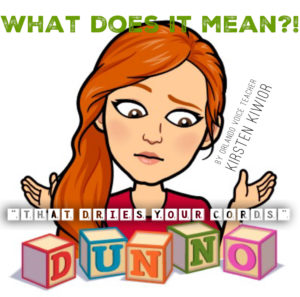 If you’ve been singing for any length of time you’ve likely heard, “Oh, that dries you out,” or “That will dry out your cords,” but what does it even mean?!

Well, our vocal cords are covered in mucus. Yum! Mucus lubricates the cords and allows them to vibrate freely to produce sound. If something “dries out your cords,” it means some external force is dehydrating your body, resulting in less mucus on your cords.

Think back to your child’s/sister’s/friend’s latest school awards ceremony and how much you had to keep. clapping. for. every. single. person. (But yay for achievement!) Your hands likely started to hurt pretty quickly with all that clapping. However, add some soft gloves and your hands would hurt way less. Similarly, mucus acts as that soft pair of gloves for your vocal cords.

Here’s how it gets worse. (You’re thinking: Worse? She already said nodes! Ahh!) If you’re not thirsty… your cords could still be dry. Usually, singers with dry cords realize their sound is a little hoarse or just not as clear as usual. Now, if one’s voice isn’t as loud/clear as normal, most untrained singers decide they just need a little more breath to get that sound back… and often it works. Briefly. But that added air only makes those cords smack together harder, which leads to even more vocal trauma. Basically, it’s like your hands hurt from clapping so you decide to clap harder thinking it will help. Yep, it’ll be louder, but you’re gonna need to stop way sooner,  your hands will sting like crazy, and you’re not gonna wanna clap again for a while.

If you sing on dry cords, you’ll tire quickly and you’ll realize you’ll need to clear your throat a LOT. That’s because your cords are in over-compensate mode. They’ll over-produce mucus to try to help. But that over-production will lead to clearing your throat which will also cause tension on your cords… it’s a vicious cycle.

So, what helps and what hurts?

TLDR: water helps and literally everything else hurts.

View all articles by Kirsten Kiwior